skip to main | skip to sidebar

I've made a website!
Here it is:
https://lrgcarter.github.io
You can see my art and comics and stuff there.
Here's a gryphon to illustrate this post: 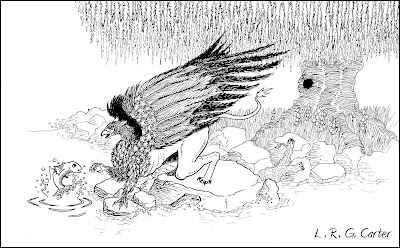 I did a comic! It's about flying saucers!

Check it out here! 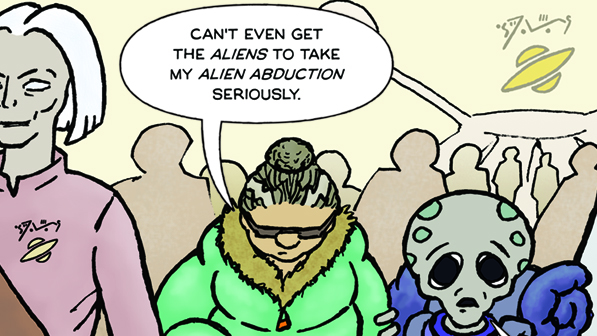 Here is a comic!

I wrote this script around 2016, so it is not a hot take or anything.

It is my first attempt at digitally colouring and lettering my work. This means that I've learnt a lot, but already see plenty that I want to improve next time!

I've tagged each page with a script for use by e-readers and the like. This is also my first time trying to add accessibility features to my comics, so let me know if there's ways I could do that better.

Here is a link to a PDF that strives to find a balance between resolution and file size. It comes in at around 10MB.

For those looking for something a little smaller, here's a super low resolution copy roughly 2MB in size.

So, this blog has been dormant for some eight years, huh? At the time that I stopped posting here, around 2012, life got a bit too much. Something had to give, and the thing that gave was my comics drawing.

Since then, I have escaped the soul-destroying job that was then destroying my soul. I got a role as an archivist, only to discover that to call yourself an actual archivist you need some high-flying qualifications. So, I saved up some and went back to uni. While I was saving up, I wrote a bunch of comic scripts. After initial rejections I thought "oh well, let's make these scripts into full comics myself, it'll be a learning experience."

So that's what this blog is going to be moving forward. I'm going to put my own comics here whenever I manage to fit them between work and uni. Which might mean years pass between posts, but that's life I guess. If you want me to be able to comic faster, you'll just have to campaign for an end to economic systems that seek to minimise our spare-time in the name of maximising convenience-industry profit. You should campaign for that even if you would prefer me not to sully the world with my scribbling too; we don't have to live like this, there are other ways.

The Awesomeness Of Simon Fraser

As of today, our living-room wall looks like this. 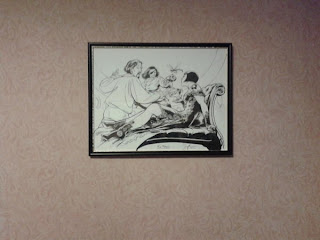 The wall paper was chosen by the landlord. Let's not dwell on that. Let's dwell instead on that Simon Fraser commision hanging in the middle.

Oh yes, you read that right.

This was a gift for my Wonderful Lady Friend, who loves both Mr Fraser's art, and the adventures of Nikolai Dante. To say she was happy to receive this today would be to put it lightly.

Here is the request I sent Simon:

I sent this at some crazy time of night, just before going to bed. Just a few hours later, I awoke to find this in my inbox. 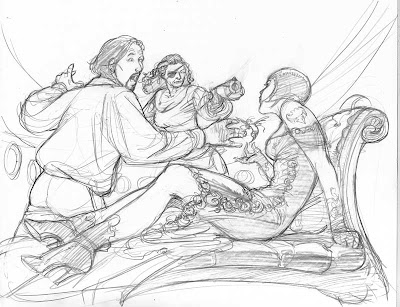 I quickly sent Simon a reply, pointing out that my WLF would "love the way you have placed Dante's arse in good focus". Then it was time for the Christmas-eve-esque wait while the art was inked, sent from America to England, dispatched to a frame shop, then finally made it home.

It was worth it though. One of the first things my WLF said was "I love that this picture has both Dante's face and Dante's arse; his two best features!" I know my Lady Friend! 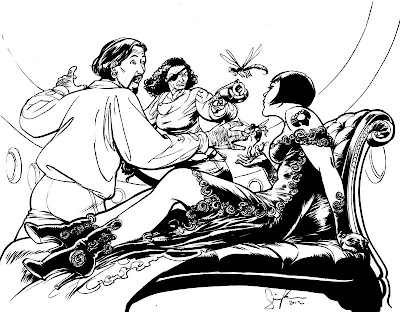 Many thanks to Simon Fraser for this wonderful work. I feel I must offer particular thanks for putting up with my less than literate emails; the excitement was too much for me to put coherent sentences together. I was going to use this post to extol the virtues of the composition and such like, but such words would be pointless when you can just marvel at the finished art above.
Posted by Louis at 16:37 No comments:

This post, I'll be looking at some of the thoughts I had while drawing the adventures of Hauptmann Who. This story was written by Greg Meldrum, and I have to say it is the most inspiring script I've ever worked on. Pretty much every panel had me chuckling, and Greg has been kind enough to let me quote some chunks of the script as I go through the art. In fact, since I wrote this post, Greg has written his own commentary, so check that out here.

Before we get started though, I wish to mention the brilliant work Owen Watts did on the lettering. Owen was kind enough to allow the bouncing back and forth of the lettered art, both of us editing our work till it was just as we wanted it. I'll be looking at the unlettered art in this post, but take a look at that WAAAAOOOOWOOOOH on the first page. Great stuff.

Right then, onto page 1. 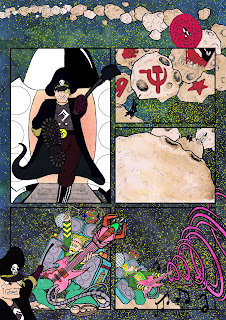 The first striking thing for any who have been following my work the past few years is the colour. There are a few jokes in this strip that simply would not work in black and white. I mulled over this choice for quite some time, but eventually decided that I had to crack open the paints. The line art took me just three weeks to do, an advantage of working at A4, but the colour work added months to the work time. The actual watercolours were simple enough, it was the hours of computer tweaking afterwards that slowed me down.

In the end it was worth it. I love the vibrancy of these colours; the pinks and the turquoise and all those stars. Hopefully I kept up the strength of the colours throughout the strip and made them a vital part of the experience.

Lets take a look at the script.